While checking Facebook on my iPhone, I ran across an article published as part of Arizona's celebration of its statehood centennial this year: Arizona Centennial: The Making of a State - Whipple blazed route for transcontinental railroad. (Recall that he was mortally wounded during the U.S. Civil War while defending Washington, D.C. If you've spent much time on the Whipple Website, you will also know that Fort Myer--now in Arlington Cemetery, Virginia--was named Fort Whipple from the 1860s until 1881, in his honor.)

The purpose of Major General Whipple's expedition through Arizona to California was to find a route for a railroad to the Pacific along the 35th parallel. His expedition explored from Little Rock, Arkansas, through present-day Oklahoma, New Mexico and Arizona, then through the Mojave Desert to Los Angeles. The western segment of historic Route 66 followed the route he identified from Oklahoma City to Los Angeles. It might be interesting to compare Google Maps' modern-day driving directions from Little Rock to Los Angeles with the path of the original (famous) Route 66. First, Google Maps:

Finally, if you look closely at this map of U.S. Railroads in 1918, you might be able to imagine the path charted by Amiel's survey: 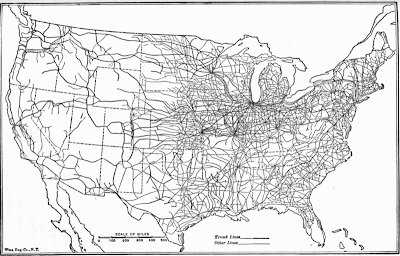