Last week we visited the Grand Canyon (south rim) and nearby Sedona, Arizona, primarily to hike. Noting that Prescott is fairly close to Sedona, two of us drove to Prescott in search of Fort Whipple, named for Amiel Weeks Whipple.

The first mobile mapping app we used got us to Prescott, but in a part of town with significant road construction. When we asked a flagman about Fort Whipple, he directed us to drive to the "nearby" Veteran's Administration Hospital. It took us only 5–10 minutes to locate the hospital. We finally located the Fort Whipple Museum inside the VA Hospital grounds.

I had expected to see the kind of fort that is often portrayed in Hollywood movies—a wall of vertical logs surrounding the interior buildings with guard towers on the corners. Instead, all we saw was this white house:

Fortunately I had googled the museum previously and read that it is open only on Thursdays, Fridays and Saturdays, and we had driven to Prescott on Thursday (November 1, 2018), so we walked up the stairs and into the museum. We were greeted by Vicki Scott, a volunteer at the museum.

We were able to walk around the ground floor and second floor of the house, and learned that it also has a large attic and a basement.

After exiting the Fort Whipple Museum Museum, we found the original gates to Fort Whipple on the edge of the site:

Fort Whipple in the 20th (and now the 21st) century consists of a number of houses built in the same style as the museum, some of them larger than the museum: 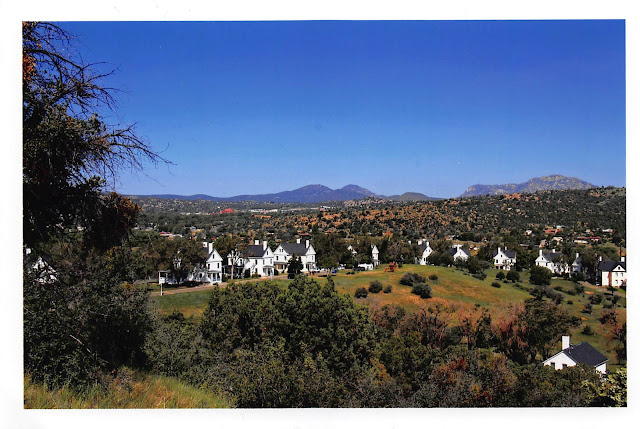 We met a former physician who had transferred to VA Hospital in the 1990's. (He has since retired, and had come back to Prescott to visit.) He indicated that their family had lived in "building number 5."

The buildings of Fort Whipple are part of the the VA Hospital complex in Prescott. Since December 6, 2003, Fort Whipple is known as the Bob Stump Department of Veterans Affairs Medical Center.

This is a photo of the main VA Hospital building. It was completed in 1937.

Here are a few other views of the VA Hospital complex in Prescott: 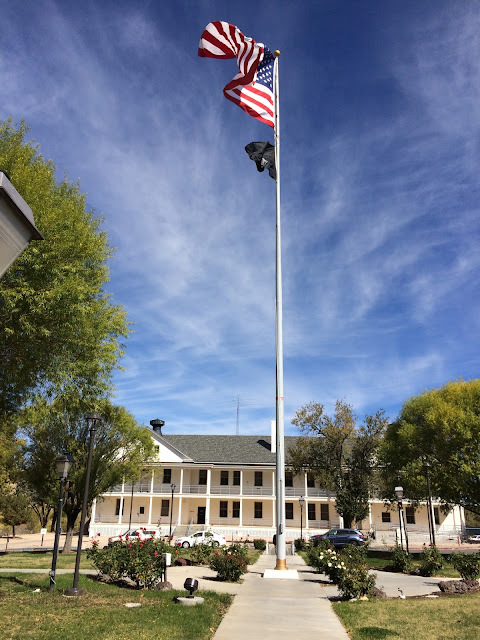 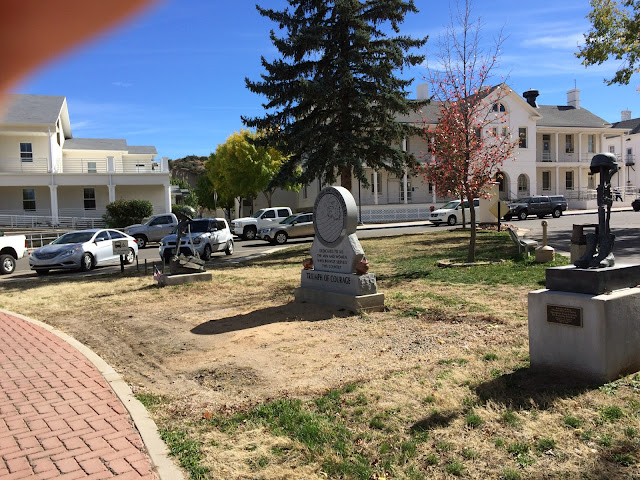 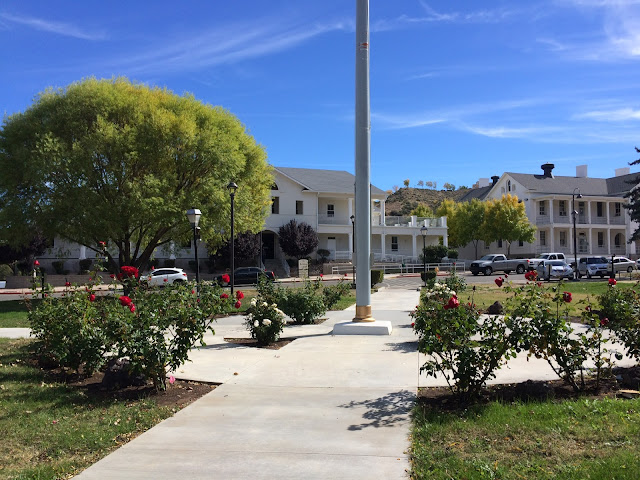 Fort Whipple was named after Amiel Weeks Whipple. According to a paper distributed at the Fort Whipple Museum, Amiel

...first came to Arizona in 1849 to survey the border between the United States and Mexico. From 1853 to 1856, Whipple conducted a survey along the 35th parallel from Ft. Smith, Arkansas to Los Angeles, California to locate a route for the railroad to the Pacific. This is roughly the Interstate 40 today. He traveled 1800 miles and made contact with at least 21 different Indian tribes.

Amiel died during the American Civil War from wounds received at the Battle of Chancellorsville (also known as the Second Battle of Fredericksburg). He was made a Brigadier General just before his death. (He died May 7, 1863, in Washington, D.C.)

An Army camp was first established in Arizona on December 23, 1863. In 1864 the camp was moved to the present location of Fort Whipple. It spread over approximately 1,700 acres at that time; today it is about 165 acres.

From 1872 to 1886, Fort Whipple was the headquarters for the Military Department of Arizona, "numbering over 20 army posts. At one time, it was the tactical headquarters for 1/5th of the U.S. Army."

In 1879, the post was designated as "Whipple Barracks." Cavalry from Fort Whipple fought the last battle of the Indian Wars in Arizona on July 17, 1882.

In 1898, while preparing to close Fort Whipple in April, the U.S. declared war on Spain. "The Fort was retained as a mobilization point for a company of cavalry." When the cavalry moved to San Antonio, Texas, the Fort became inactive.

In 1902 Fort Whipple was reactivated.


The old fort was demolished and new buildings were constructed. A two-story concrete block barracks, two-story officers' quarters, one of brick and ten of concrete blocks (Fort Whipple Museum is housed in building #11) were built through 1908. All the houses were to be constructed of brick, but the labor and the cost of the brick would not permit the use of brick. Building 1 was built in 1903. They are all similar in facade with simple Victorian Revival details. They have gabled roofs with cross gables over the wing. They differ mostly in the execution of the veranda and the finishing materials. Each house has two fireplaces with mantles made in different styles with a variety of woods.

Arizona became a state in 1912, and Fort Whipple was declared obsolete. A caretaking force of one officer, a sergeant and 20 men remained.

In 1918 (during World War I), Fort Whipple was reactivated to care for soldiers with tuberculosis and respiratory ailments. By September the sanatorium had 215 patients.

Since that time, the area has been transferred administratively among federal agencies. The size of the Fort has decreased:

On October 29, 1999, the Fort Whipple/Department of Veterans Affairs Medical Center District was listed in the National Register. 58 buildings dating from 1903 to 1997 were listed.


Today it is a busy VA hospital.